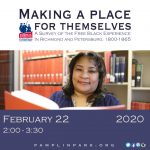 Celebrate Black History Month with Elvatrice Belsches on February 22, 2020 at 2:00 p.m. as she speaks on “Making a Place for Themselves: A Survey of the Free Black Experience in Richmond and Petersburg, 1800-1865.”
Belsches’ will share rare photos, primary source documents, and narratives surrounding the African-American experience of freedmen in the Richmond region.
Elvatrice Belsches is a public historian and co-founder of the Central Virginia African-American Genealogical and Historical Society. She has lectured nationally on the topics of genealogy and slavery.
Belsches researches and chronicles the experiences of African-Americans in the Richmond region of Virginia . She has authored several titles for the “African American National Biography” (Oxford University Press) and is the author of “Black America Series: Richmond, Virginia.”
Additionally, Belsches is a documentary film maker who served as a researcher, scholarly advisor and cast member for the PBS documentary, “The Hail Storm: John Dabney in Virginia.” The documentary tells the story of African-American 19th-century Richmond caterer John Dabney. She also had the distinction for serving as a researcher for Steven Spielberg’s movie “Lincoln.”
This event is open to the public and included with the Park’s regular daily admission fee.