What began in 1991 as an effort to preserve a threatened Civil War battlefield near Petersburg, Virginia, has evolved into one of America’s finest history and heritage travel destinations.

In the early 1990’s, a tract of land in Dinwiddie County, Virginia, became available for purchase. The tract included a stretch of well-preserved Civil War earthworks constructed by Confederate troops of Gen. Robert E. Lee’s Army of Northern Virginia. It was on this site on April 2, 1865 that 14,000 Union soldiers under Gen. Ulysses S. Grant broke through Lee’s defensive line, ending the nine-month campaign for Petersburg and setting in motion the events leading to Lee’s surrender at Appomattox Court House one week later.

The Association for the Preservation of Civil War Sites (the forerunner of today’s Civil War Trust) alerted Dr. Robert B. Pamplin, Jr., a businessman and philanthropist living in Portland, Oregon, that the land, which had belonged to his ancestors during the Civil War, could be purchased and preserved. Dr. Pamplin operates the R.B. Pamplin Corporation, a Fortune 400 company. He also manages the interests of the R.B. Pamplin Foundation, which provides significant funding for charitable and educational causes.

Dr. Pamplin saw the purchase of his ancestral lands as not only an opportunity to preserve but also to educate. He acquired the original one-hundred acres of historic land and funded the construction of a $5,000,000 development, including an interpretive center and a one-mile trail, which opened in June 1994 as Pamplin Park Civil War Site. Soon thereafter, the Pamplin Foundation purchased an adjacent parcel that contained Tudor Hall, the plantation home of the Pamplins’ ancestors, and authorized its restoration. 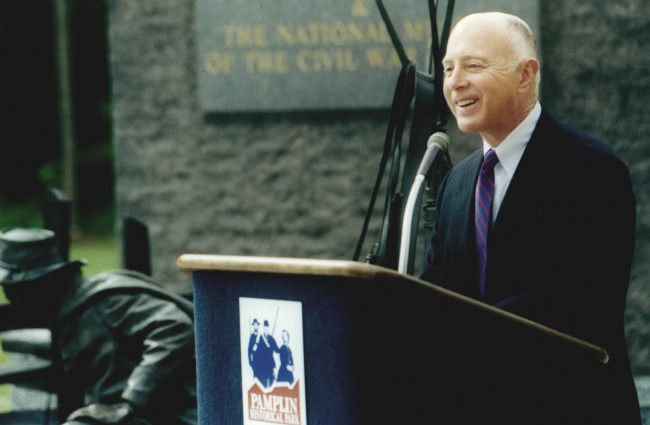 Though the facility was an outstanding interpretive site as it existed, Dr. Pamplin envisioned a much more ambitious scenario, one which would place the enterprise among the nation’s elite historical attractions. He assembled a blue-ribbon team of museum professionals and historians to craft plans to expand the Park and add a world-class museum along with complete educational and interpretive programs. That vision became a reality on Memorial Day Weekend 1999, with the opening of The National Museum of the Civil War Soldier, a 25,000 square-foot, $13,000,000 state-of-the-art facility. Boasting 363-acres, the Park changed its name to Pamplin Historical Park & The National Museum of the Civil War Soldier.

Additional land purchases and donations brought the historic Banks House—Ulysses S. Grant’s headquarters on April 2-3, 1865—into the park, as well as the Hart Farm and several other small parcels to bring Pamplin Historical Park up to its current 424-acre configuration. Today, Pamplin Historical Park & the National Museum of the Civil War Soldier is the largest privately-owned Civil War historic site in the country.  The Pamplin Foundation has contributed more than $40,000,000 to create this world-class educational campus.