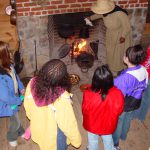 Feeding Body & Soul programs will include several 30-minute cooking demonstrations at both the Tudor Hall Plantation and the Military Encampment areas. These programs will occur multiple times daily, so that visitors will have several opportunities to view them regardless of when they arrive.
Staff in period attire at Tudor Hall will demonstrate open hearth cooking skills and meal preparation for several common dishes. Visitors are invited to join in on discussions to include period methods of acquiring ingredients, preservation, preparation, and serving meals.
Visitors can also join soldiers at the nearby Military Encampment as they demonstrate camp fire cooking skills by preparing a few common soldier meals. Explanations on how period military rations were prepared, packaged, transported, and distributed will also be provided.
A special Tudor Hall Plantation walking tour titled “Feeding Body and Soul: Plantation Foodways” will be offered at 11:00-11:45 am, and again from 2:00-2:45 pm. The Tudor Hall walking tour for this special event weekend will focus on and incorporate the various garden vegetables and edible demonstration crops that are grown at Pamplin Historical Park. Particular attention will be paid to explaining the similar and different items that plantation owners and the enslaved consumed in their diets. This includes the means of production, primary methods of preparation, and how food was distributed on many Southside Virginia plantations.
The Breakthrough Battlefield Tour will also be offered twice during the day, from 1:00-1:45 pm, and again from 3:00-3:45 pm. Additional emphasis will be placed on Grant’s ever-lengthening and Lee’s ever-shortening supply lines, the US Military Railroad, and how these factors improved or threatened the common soldier’s ability to receive rations. A discussion about soldier morale, which was partly linked to their diets, will also be included.
All event programs are included with regular daily paid admission.
+ Google Calendar+ Add to iCalendar