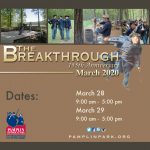 *Due to ongoing concerns about the novel coronavirus (COVID-19), Pamplin Historical Park and the National Museum of the Civil War Soldier is cancelling or postponing all events and programs until April 15, 2020, based upon the guidance of the CDC regarding “social distancing” and the elimination of large gatherings.  This decision is being made out of an abundance of caution.  It will be impossible to know if we are overreacting or doing too much, but it will be quite apparent if we under react or do too little.  Please continue to check our website and social media accounts for additional updates.*

Join us as we remember the 155th Anniversary of the Breakthrough Battle, which ended the 292-day Petersburg Campaign and forced the Confederate withdrawal from Petersburg and Richmond. A mere seven days later the surrender took place at Appomattox.

At 4:40 a.m. April 2, 1865, some 14,000 Union soldiers moved forward in the chilly gloom toward the Confederate fortifications six miles southwest of Petersburg. Less than an hour later, the American flag flew over the Confederate line following one of the most important battles of the entire Civil War. This engagement led directly to the evacuation of both Petersburg and Richmond. One week later, Robert E. Lee surrendered to Ulysses S. Grant at Appomattox Court House and our nation began the long process of healing.

The Park will host a full schedule of activities and programs for walk-in visitors each day. Visitors will have the opportunity to meet General U. S. Grant portrayed by Kenneth J. Serfass, drill with the troops, watch battle demonstrations, learn about 19th Century healing remedies and recipes and listen to period fife and drum band music and more.

Mr. Kenneth J. Serfass served in the U.S. Marine Corps for 20 years, before becoming a music teacher and then following his true passion. He has studied the Civil War for nearly 50 years and now is a full-time professional living historian portraying General Ulysses S. Grant. Serfass first began portraying Grant in 2009 when living in California and now speaks across the country at various events and for the National Park Service. He is both educational and entertaining as Serfass draws on his own military experiences and Civil War studies to perform a masterful first person public presentation of Grant.

The public is invited to meet Grant and experience the weekend’s programs which are included with Park admission. Daily admission for adults is $15, seniors (65+) and Military w/ID $12.00, children (6-12) $8, and children under 6 free.