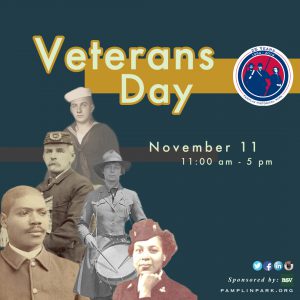 As former U.S. President Ronald Reagan stated “We remember those who were called upon to give all a person can give, and we remember those who were prepared to make that sacrifice if it were demanded of them in the line of duty, though it never was. Most of all, we remember the devotion and gallantry with which all of them ennobled their nation as they became champions of a noble cause.” In the spirit of Reagan’s quote, Pamplin Historical Park staff will offer multiple programs throughout the day, to include presentations on Medal of Honor recipients, a comparison of Civil War and U.S. World War II soldiers, a performance of soldier’s songs from the Civil War and a ceremony with cannon fire salute.

Park Director of Education, Tim Talbott will present a talk at 11:15 am on Medal of Honor recipients from the Breakthrough Battle which occurred on April 2, 1865. The most notable of these was Captain Charles Gould of the U.S. 5th Vermont Infantry Regiment who is credited as being the first man to enter the Confederate held earthworks.

A Veterans Day ceremony will start at noon with a presentation of colors by the Virginia State University ROTC Color Guard followed by a cannon fire salute. Afterwards, Civil War programming will be joined by a World War II G.I. living-history demonstration where historical comparisons will be made between the soldiers of both wars. Visitors will see that some elements remain the same and many different as General George S. Patton observed in his quote, “If everyone is thinking alike, someone isn’t thinking.”
Families are also invited to join in soldier’s songs at 2:45 pm from the Civil War with a live performance by the Haversacks and Hardtack String Band. Everyone will enjoy traditional songs of home such as “Just Before the Battle Mother” and more lighthearted songs like “Goober Peas.”
All visitors will have the opportunity to join staff for tours of the Breakthrough Battlefield which on April 2, 1865, resulted in the evacuation of both Petersburg and Richmond. A temporary display of World War II artifacts will also be available for viewing in the National Museum of the Civil War Soldier.
All event activities and programs are included with regular daily paid admission.
+ Google Calendar+ Add to iCalendar