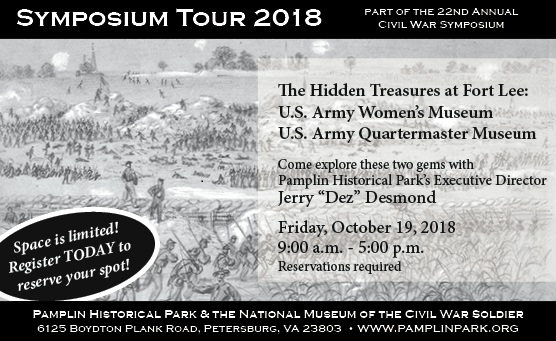 Join historians for a special tour in conjunction with our 22nd Annual Civil War Symposium on October 19, 2018 from 9 a.m. to 5 p.m.

Pamplin Historical Park Executive Director, Jerry “Dez” Desmond will begin the tour at the Park and then lead tour attendees on an experience as the hidden treasures at Fort Lee are revealed from amazing museums to historic World War I trenches.

The tour features two world class museums including the U.S. Army Quartermaster Museum and the U.S. Army Women’s Museum. Both museums feature amazing displays and one of a kind artifacts like those belonging to General U. S. Grant and the story of Medal of Honor recipient Dr. Mary Walker and others.

“The U.S. Army Women’s Museum is the only museum in the world dedicated to Army women. The Museum honors women’s contributions to the Army from the Revolutionary War to the present, telling their stories with interactive exhibits and videos throughout the gallery, as well as film presentations in our theater. The museum also has an extensive research and learning center, and memorial garden.” – U.S. Army Women’s Museum

Tour attendees will enjoy a lunch on this active military base in one of the mess halls alongside active duty soldiers. A U.S. Army historian will also guide attendees through the fort’s training trenches that remain from World War I, while sharing parallels between the Civil War and the Great War. This is a rare experience which is limited in space. The tour fee is $89 and reservations can be made by calling (804) 861-2408 and download a printable form by clicking here.