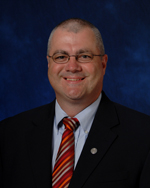 orical Park & The National Museum of the Civil War Soldier has established a new Civil War Roundtable and it’s meetings are held on the first Thursday of each month at 7:00 p.m. in the Park’s Education Center.

Dr. McKnight is currently a professor of history and the Founding Director, Center for Appalachian Studies at the University of Virginia at Wise. He has authored three books and co-authored a fourth titled The Age of Andrew Jackson. McKnight has been recognized for his efforts to preserve regional and local history with awards ranging from the 2006 James I. Robertson Literary Prize for Confederate History for Contested Borderland to being the recipient of the 2011 Tennessee History Book Award for Confederate Outlaw.

The Petersburg Civil War Roundtable, founded in 2018, is dedicated to the study, preservation, and discussion of the people and events that were part of the War Between the States (1861-1865).