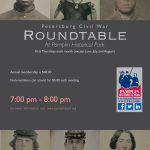 Join this month’s guest speaker John Hennessy as he talks about his book “Return to Bull Run” which is based on his recently revised book The First Battle of Manassas: An End to Innocence, July 18-21, 1861.

John J. Hennessy is one of the leading Civil War battle historians of his generation and author of the definitive book on the Battle of Second Manassas, Return to Bull Run. He previously served as a ranger at the Manassas battlefield and is currently the chief historian at Fredericksburg and Spotsylvania National Military Park. He lives in Fredericksburg, Virginia.

The Petersburg Civil War Roundtable (PCWRT) will meet the first Thursday of each month (except June, July, and August) at Pamplin Historical Park and the National Museum of the Civil War Soldier from 6:30 pm-7:30 pm. Annual membership is $40.00. Individuals who are already members of Pamplin Historical Park can become members of PCWRT for $20.00. Non-members can attend for $5.00 each meeting. Call (804) 861-2408 for more information.