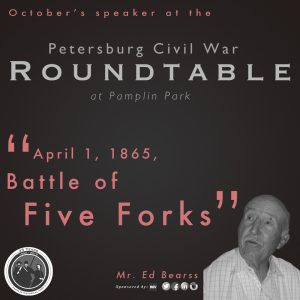 Due to unforeseen circumstances, Ed Bearss will not be with us for the October PCWRT meeting. Instead, our own Director of Education, Interpretation, Visitor Services & Collections, Tim Talbott will speak on “Visionary or Iconoclastic: Maj. Gen. Patrick Cleburne and His Proposal to Emancipate and Arm Slaves for the Confederacy.”

October’s Round Table guest speaker is the nationally recognized award-winning author and historian Ed Bearss. Mr. Bearss will be speaking on the “April 1, 1865, Battle of Five Forks”.  Mr. Bearss is a United States Marine Corps veteran of World War II, a military historian and author known for his work on the American Civil War and World War II eras. He is also a popular tour guide of historic battlefields for The Smithsonian Associates. Bearss served as Chief Historian of the National Park Service from 1981 to 1994 and is currently Chief Historian Emeritus.