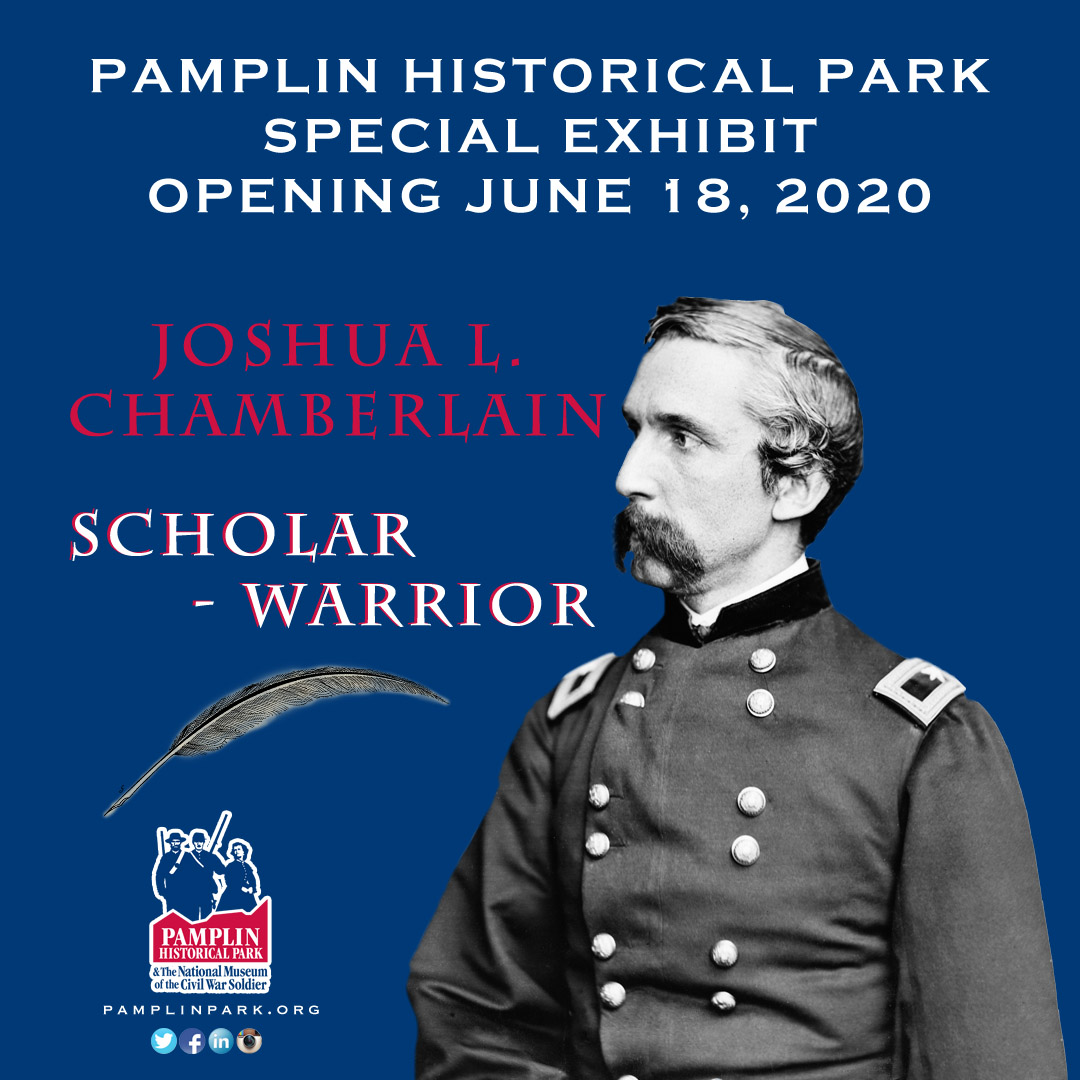 This limited time exhibit explores the life of the Civil War General and former Governor of Maine from birth to his death at age eighty-five. Artifacts, artwork and documents tell Chamberlain’s story of his formative years through his rise into today’s pop culture.

The exhibit opening date of June 18 coincides with the severe wounding of Chamberlain during the Second Battle of Petersburg in 1864. This wound would be the cause of his death fifty years later in 1914 making him the last Civil War veteran to die of his wounds.

Joshua L. Chamberlain was born in Brewer, Maine as the oldest of five children. His parents wanted him to become a clergyman or join the military. Chamberlain instead sought academic pursuits and attended Bowdoin College in Brunswick, Maine where he studied Ancient Greek and Latin, graduating in 1852. Three years later he returned to Bowdoin as a professor of rhetoric and soon made use of his fluency in nine languages by being appointed Professor of Modern Languages in 1861.

Chamberlain left his teaching pursuits after the Civil War began and was appointed lieutenant colonel the famous 20th Maine Volunteer Infantry Regiment. His younger brother Thomas Chamberlain would also serve as an officer in the same regiment. Joshua Chamberlain’s actions at Gettysburg would later result in being awarded the Medal of Honor. There he saved the Union left flank at Little Round Top with a bayonet charge made famous by the book Killer Angels and the 1993 movie Gettysburg where he is portrayed by actor Jeff Daniels. This would also be the cause of Chamberlain rising into the nationally known pop culture of today.

He received two minor wounds at Gettysburg prior to his severe wounding at the Second Battle of Petersburg on June 18, 1864 which led Lt. General Ulysses S. Grant to promote Chamberlain to brigadier general. Once recovered, he returned to duty in the spring of 1865 for the Battle of Lewis’s Farm where Chamberlain was nearly captured and wounded again. He survived and went on to preside over the parade of the Confederate forces at Appomattox Court House on April 12, 1865.

Chamberlain’s post-war life saw him return to Maine on a tide of popularity and serving four one-year terms as Governor. He also returned to Bowdoin College now as it’s president until retiring from ill health. There were additional pursuits in law and business but, his old wound from Petersburg plagued him for the remainder of his life. Six surgeries failed to ease his condition and Chamberlain died in Portland, Maine in 1914. One of the same two surgeons who fifty years earlier, had tended to his wounds at Petersburg was by his side.

The special exhibit runs through November 29, 2020 and is included with regular daily admission during normal operating hours.