“Richmond Shall Not Be Given Up” Book Signing with Doug Crenshaw 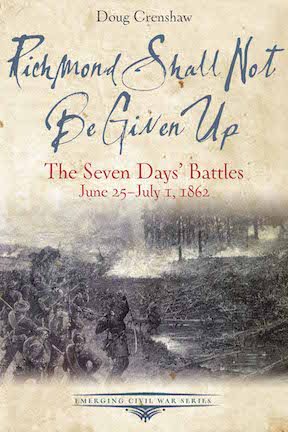 In the summer of 1862, with the eastern Confederate army on its heels, and the Union army nearing the Southern nation’s capital city, a dramatic turn occurred with a series of battles. Come out and hear historian and author Doug Crenshaw describe these fights in which Robert E. Lee took command of the newly named Army of Northern Virginia and aggressively attacked Gen. George McClellan’s Army of the Potomac.

After the presentation, Mr. Crenshaw will be signing copies of his book, Richmond Shall Not be Given Up: The Seven Days Battles. June 25-July 1, 1862 which is part of the Emerging Civil War Series.  Copies of this book will be available in the Civil War Store for purchase and author signing. The event is free with your Pamplin Historical Park membership or paid park admission.