Pamplin Historical Park preserves a large portion of the hallowed ground where the Petersburg Breakthrough of April 2, 1865 took place.  The Battlefield has been designated by the United States Department of the Interior as a National Historic Landmark, the nation’s highest recognition of historical significance for privately-owned sites.

Thousands of linear feet of the original Confederate fortifications, complete with artillery redans, picket posts, and military dams, are intact along the battlefield trail system.  Pamplin Historical Park has removed the trees in several key locations to suggest the stark landscape that prevailed here in 1865. In other places we have removed the modern tangled undergrowth to open vistas across the battlefield.

The Breakthrough Battle of April 2, 1865

Pamplin Historical Park preserves one of the Civil War’s most important and decisive battlefields. On April 2, 1865, Union forces commanded by Ulysses S. Grant attacked a portion of Robert E. Lee’s army southwest of Petersburg.  More than 14,000 Northern troops swarmed ahead in a pre-dawn attack, larger than “Pickett’s Charge” at Gettysburg, and shattered Lee’s line beyond repair.

Known to history as “The Breakthrough,” this engagement forced General Lee to advise the Confederate government in Richmond to evacuate the capital and ended the Petersburg Campaign, a military stalemate that had lasted more than nine months. Exactly one week after the Breakthrough battle, Lee surrendered to Grant at Appomattox Court House.

The Fortifications Exhibit is the only one of its kind in the world: sixty yards of classic late-war field fortifications built exactly to scale using the engineering specifications of the day. A six-foot high parapet descends to a seven-foot deep ditch. The earthworks are fronted by a row of sharpened logs—called fraise–protruding from the ground. Tree stumps and abatis (the Civil War equivalent of barbed wire) occupy the landscape in front of the earthworks.  This exhibit provides a dramatic illustration of the landscape that characterized the Petersburg area in 1864 and 1865 and helps explain why the campaign for Petersburg lasted 292 days.

Artillery Demonstrations:
An artillery redan is built at the far left of the earthworks. From here the Park costumed staff conducts artillery demonstrations featuring live cannon firing periodically during the year. These lively (and loud) demonstrations are favorites of Pamplin Historical Park visitors. 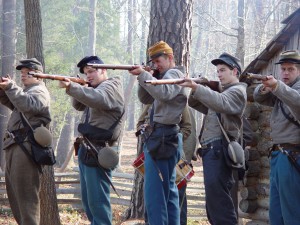 Several structures, all of which are open to visitors, reflect the variety of crude architectural styles used by the soldiers during the Civil War’s final year. Wooden huts and canvas shelters illustrate the functions that occurred in camps from Virginia to Texas during the Civil War. 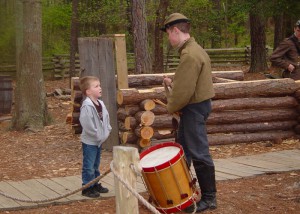 Kids of all ages can step inside the Discovery Hut for a hands-on experience with Civil War uniforms and clothing. Kid-size uniforms, hats and accoutrements are available to be tried on for size – and make a great photo opportunity. Kids can also learn about drum rolls and test their skills on a real drum!

The Military Encampment is located near the Battlefield Center at the entrance to the Breakthrough Trail.