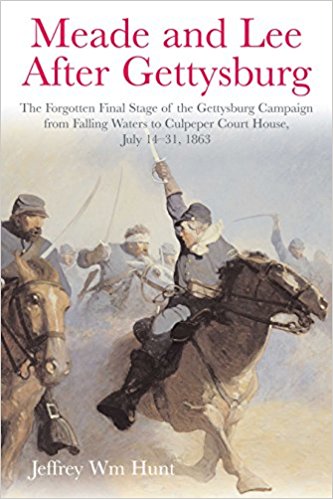 Join author Jeffrey Hunt as he speaks about his recently published book: Meade and Lee After Gettysburg: The Forgotten Final Stage of the Gettysburg Campaign, from Falling Waters to Culpeper Court House, July 14-31, 1863 at Pamplin Historical Park.

The period of the Civil War in Virginia sandwiched between the traditional ending date of the Gettysburg Campaign and the arrival of U. S. Grant is routinely overlooked. The operations conducted during that period have been overshadowed by the bloodshed in Pennsylvania, the large-scale Confederate victory at Chickamauga in September, and the disastrous Southern defeat at Chattanooga two months later. Author Jeffrey Wm Hunt, in his new Meade and Lee After Gettysburg: Vol. 1: From Falling Waters to Culpeper Courthouse, July 14 to October 1, 1863, helps rectify this glaring oversight.

This event is included with regular Park admission or free to Park members.